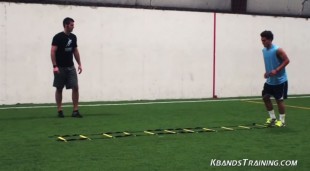 By improving soccer speed and agility, you will have more control over the ball and the body. Good players are the ones that can react explosively to unexpected changes on the field without losing their balance. The hip flexors are the most important muscles, if you want to improve these skills and this drill will show you how to do it by including the entire body including the arms. This drill is done with the help of Kinetic Bands, Ladder, Cones and a soccer ball.

Strap the Kinetic Bands on your legs, warm up and you can begin!

Start with the Ladder. Run down the Ladder by placing one foot into a square. The arms need to be in dynamic movement all the time and the knees should stay high. At the end of the Ladder sprint to the first cone and run around it to the second one and run around it to the third one, this motion is the same for all the other cones. When you reach the cone lines jump over them with your knees high up, and finnaly run around the last cone to the ball and shoot it. Repeat this twice.

The next drill is more focused on the lateral motion. Run sideways dwon the Ladder with each foot placed in the square, again be sure that your arms are working and your knees driven high. When you come to the end of the Ladder, you will run zig-zag around the cones again, but this time you are facing in one direction. Which means you run to the first cone backwards, go around it and run forward to the second cone, the same movement goes fort he res tof the cones. The last part of the drill is the same as the first one, you jump over the line cones, sprint around the last cone and shoot the ball. When you have done one set do another one, only this your body faces another direction.

Fort he last part unstrap the Kinetic Bands and repeat the entire exercise. Because your legs will feel lighter focus on quickness, footwork and balance.

Watch the video, that will help you with your training sessions!