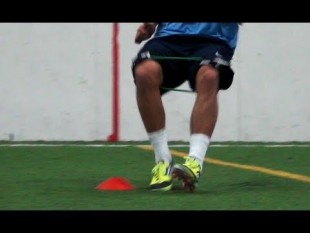 An easy way to beat your opponent is the pass the ball and break away method, but for this method to work is a soccer specific speed and agillity training. Which means fast direction changes. To improve these skills you need to work on conditioning in two primary areas:

2. Power and stability in the core and hip flexors

The 4 cone drills an exercise that will help us with mental coordination and sharp reflexes. The second can be improved by doing the same drills with additional resistance of the Kinetic Bands applied to the upper legs and core can help soccer players build strength and generate an explosive response to change directions on the field.

When the starting signal is given sprint toward the cone designated by the coach. If the destination is one of the rear cones, the player will backpedal. If the next destination is a cone at the front of the square, the player will sprint forward. Each time the player arrives at a new destination, the coach will call out and point to the next cone. Regardless of the direction of motion, the player should face forward, which means backpedaling to the rear cones, sprinting to the front cones, and running laterally across the square from side to side.

Each time you run to a cone at the front of the square, pause and accept a pass from the coach. The pass can be either a foot pass or a chest pass, but in either case, the toss should be controlled and the pass should be executed with precision and accuracy.

As you move from cone to cone, the resistance of the Kinetic Bands will work against your natural stride, bringing the knees down and the legs closer together. You should consciously push back against this by keeping the knees up and working to maintain tension in the hips and length in the stride. This 4 cone soccer drill should be difficult, and you should be struggling after about 30 seconds. If the move feels too easy, it means you are allowing the bands to control the motion. Coaches should observe soccer players carefully, and in addition to giving clear directions and controlled passes, they should encourage players to keep their knees up and arms engaged at all times.

The 4 cone soccer drill should be completed in four to six 30-second sets, separated by rest periods of about one minute to a minute and 30 seconds. After four to six repetitions, the bands should be removed and clipped to the Kinetic Band straps, and soccer players should complete two more sets without resistance. A neurological sensation of extreme lightness will last for a few minutes after the bands are removed, and as long as this sensation lasts, soccer players should use it to increase speed and explosivity during direction changes. After two final unresisted sets, the soccer player and soccer coach can switch roles if necessary and repeat the drill in reversed positions.

Watch the video, that will help you with your training sessions!